The Mahishamardini Cave is near to the light house. It is the most outstanding mandapam. The wall on the right side, is carved with the Durga, riding on the lion and defeating the Mahisha, the buffalo demon. In the opposite side there was a carving of Vishnu reclining on the great serpent Sesha. At the back of the Mahishamardini Cave there are three cells containing Shiva, Uma (Consort of Shiva) and their son Skanda. 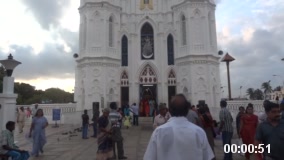 Basilica of Our Lady of Good Health,Tamilnadu
1195 Views