Shyamala Surendran has become an integral part of the cultural growth of Kochi ever since she started her Dharani School of Performing Arts. Dance is a passion for her. Her large expressive eyes and high cheekbones complemented by a slim figure suit her vocation as a dancer. In 1982, at the age of 34, with her husband at sea and son at a boarding school, she enrolled for her first Bharatanatyam class at Fort Kochi. Shyamala performed her arangettam at the Guruvayur Temple in 1984, after being taught by C. E. Janardhanan, Dr. Dhananjayan's pupil, who opened her eyes to the world of dance. Shyamala found her true style in Mohiniyattam though. Her gurus were Kalamandalam Kalyanikuttiamma, the doyen of Mohiniyattam, and her daughter Sridevi Rajan. The entire lasya (grace) in Mohiniyattam has captivated this graceful dancer.Dharani was formed in 1987 at her residence with three students. As the number increased the classes extended from the living room to the garage. Dharani, with nearly 200 students, is today a dancing school with a difference. Shyamala Surendran and her students have held dance performances in several parts of India and abroad, earning rave reviews everywhere.
To watch her Interview Click here 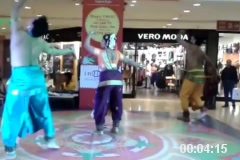